) is full of vampires — and zombies — and explosions — and touching ‘coming of age’ type-baloney.

See custom illustrations for each book at the series website! 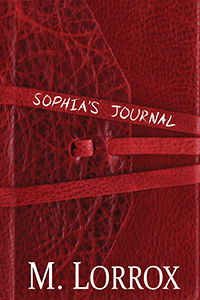 SOPHIA’S JOURNAL documents one survivor’s journey and marks the beginning of the Infinite Vampire adventure.

It features over two dozen custom, pen and ink drawings and 96 pages of handwritten story. 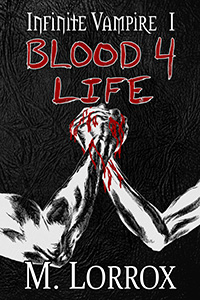 Stay living in secret—in peace—or help the humans with their “zombie problem” and risk having the life you’ve built torn to pieces? One vampire family faces such a dismemberment, and whether they like it or not, they’re about to have the biggest adventure of their lives.

In the center of it all is the teenage vampire Eddy. His life is hard, and it’s about to really suck. Dealing with high school, girls, and that whole “daylight cooks your ass” issue asks a lot of him. His friends don’t know his secret—his family’s secret—and he can’t tell them…

Not even his legendary parents fully understand him or his desire to one day become a Knight of the Order.

This weekend, everything changes. 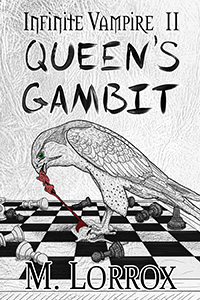 "The players and the stakes are getting big (and bloody)." -M.

Exhausted after their weekend, a small-town family of vampires heads to DC. They're greeted by a plot that threatens to blow their world apart and cast it into chaos. The fates of the nation, the Vampire Order, and their family are up in the air.

Eddy meets his heroes—squires his age—and discovers a powerful secret. Sadie navigates the politics of the ancient House of Elders and tries not to kill anyone. Charlie tackles the demands of his new role while dealing with bureaucrats, wage-earners, family drama, and a threat so big that he must once again put his sword to use...

But something has been overlooked; two pieces on the board defy all expectations, and they completely change the game.

Infinite Vampire II: QUEEN'S GAMBIT picks up where BLOOD 4 LIFE drops off and takes the story in a new direction: it’s a pulse-pounding, gut-wrenching, suspenseful thriller. 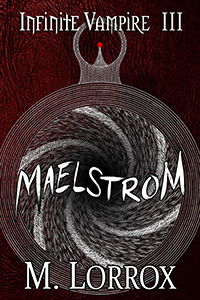 There is no peace for the wicked, and tonight there’s none for anyone in Washington, DC. Minutes ago, horror was unleashed, and no one is prepared—they’re devastated. When push comes to gnaw, people must choose: try not to die, or sacrifice themselves to save another.

While innocent loved ones are trapped in a nightmare, heroes will rise…and fall. The fight will take them to death’s door, but they don’t plan on knocking. These soldiers plan to kick that door down, toss in grenades, and run like hell. They better watch their step, because beneath their feet is a river of blood, spilled by the threats all around them.

And there’s one other thing—something deep inside that the brave can embrace: a ruthless determination to fight back, to live.

Infinite Vampire III: MAELSTROM picks up where QUEEN’S GAMBIT drops off and takes the story in a new direction: one that tears along like it’s being chased by a zombie…on fire.

It’s all come down to this: a call to the brave to do what’s right and kill who’s wrong. More than anyone imagined is on the line, and that line is a trail of destruction leading straight toward Væir. A small team of heroes has a huge task, but it’s not as simple as they believe…

An ancient evil breathes ever closer as a modern apocalypse unfolds faster, and above them all, the sun sets over an ocean of pain, painting the sky red. Yesteryear’s legends, bound in blood, once again fight alongside each other. Tomorrow’s warriors take on their first missions, and they form lifelong bonds by bleeding together—bonds they hope last more than the day.

But while much is uncertain, the true meaning of one thing is made apparent: Life in the blood—death in the blood.

Infinite Vampire IV: ANTIVENOM picks up where MAELSTROM drops off and completes the story in the only way M. Lorrox knows: EPIC’LY.